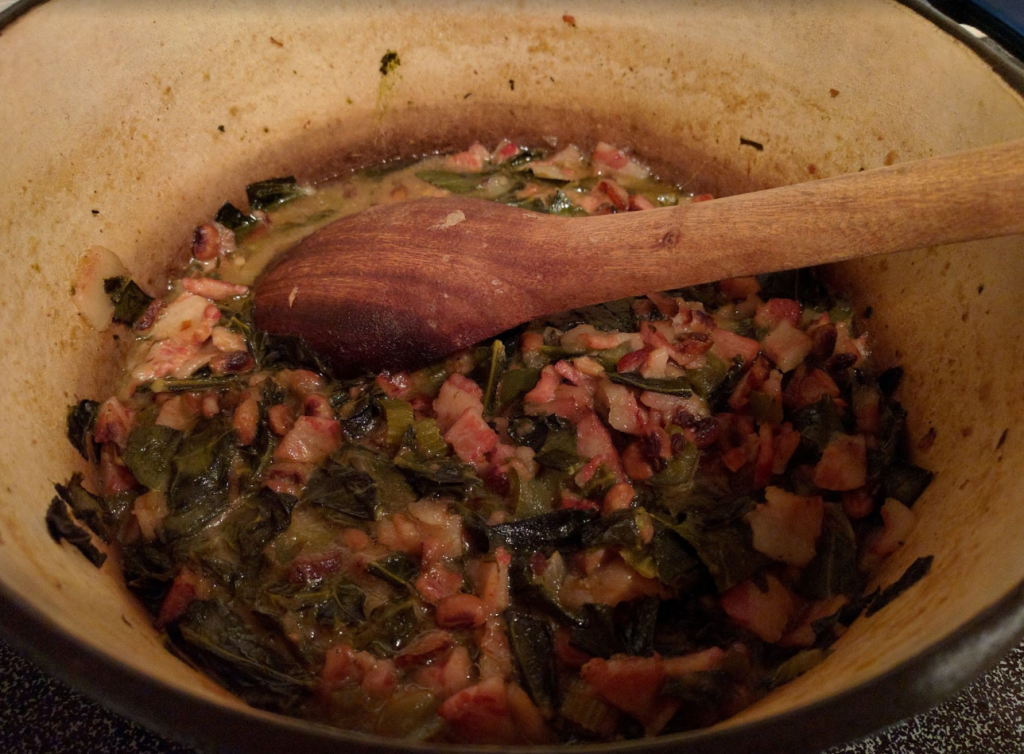 I didn’t get a chance to make my annual King Cake this year for Eli’s birthday since I was away most of the day.  But when I got home Kris surprised me by making not only gluten free dairy free King Cake, but Hoppin’ John!

A popular New Years meal, Hoppin’ John was traditionally eaten in the southern United States to bring in wealth and prosperity for the New Year.  I think the meal was lesser known among wealthy people, the point of it was that it was inexpensive.  In fact, if you have it for leftovers the next day the meal is called Skippin’ Jenny which only adds more to the New Years prosperity–probably because of one’s frugality.

Robert Moss has an excellent article on the Historical Problem With Hoppin’ John which explains that our modern Bacon, Rice, and Peas are so degraded which is why we have so many ingredient’s in modern recipes to try to get back the traditional flavor.  That said Hoppin’ John is one of my favorite dishes, right on up there with Shrimp Gumbo.  Here’s more or less what Kris put it in it (roughly based on Gigi’s Hoppin’ John Soup recipe)

While the veggies cook, wash and remove center rib from collard leaves by cutting leaves in half length-wise and discarding center rib. Stack the leaf halves and chop; set aside.

Add garlic to the veggies in the soup pot and stir 1-2 minutes, until garlic becomes aromatic. Add ham and peas with liquid until simmering, about 2 minutes.

Add broth, collards, red pepper flakes, salt, pepper, and thyme, and stir. Cover the pot and simmer over medium-low heat for 30 minutes. Check occasionally and add broth as needed to keep food from sticking to the bottom of pot.

Remove the lid. Stir and check vegetables for desired firmness/tenderness. If needed simmer an additional 15 minutes and add broth as needed.

And of course it’s good to cook it in advance and let it sit for a bit. 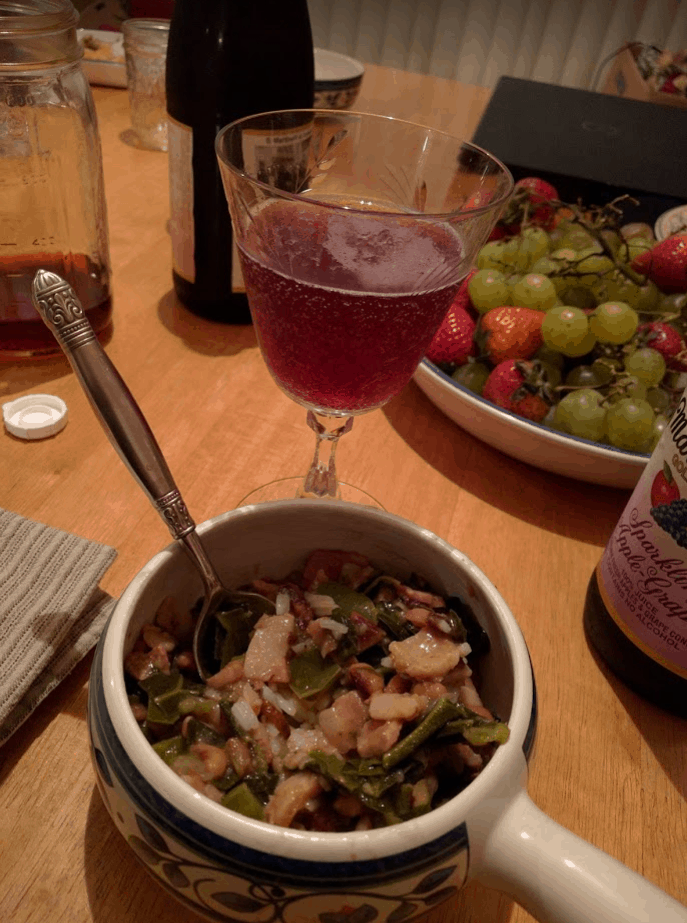 Since the rest of my family is gluten and corn free we didn’t have French Bread slathered in butter or Cornbread, but if you can eat those things I highly recommend having one of those for your side.

Of course, the King Cake, was great too! 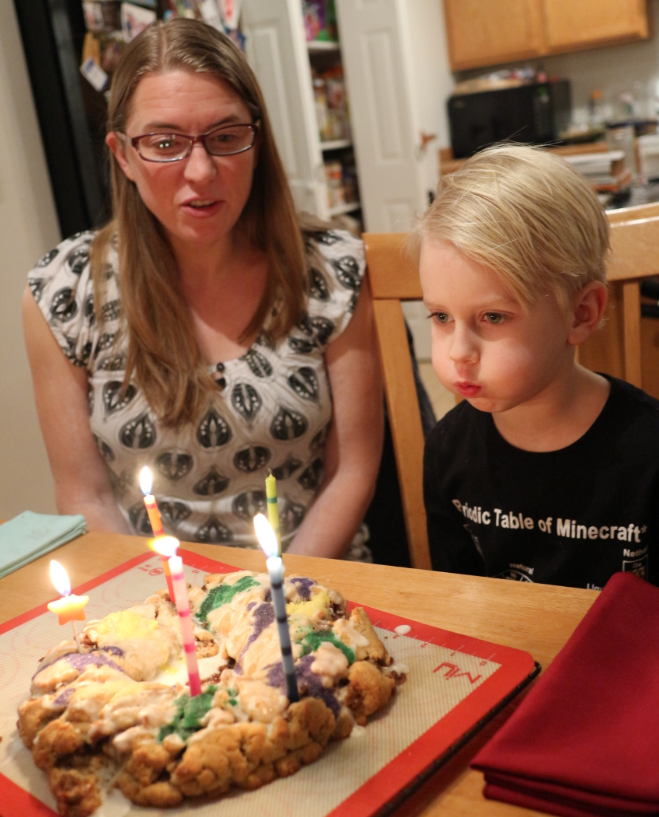 We started a tradition last year where Eli and I make a Birthday King Cake on New Years day (which is also Eli’s Birthday).  We still had to call Kris a dozen times to help us interpret the recipe but I think we did a little better this year.

Eli has gotten pretty good in the kitchen, a month ago I was making Beignet Donuts and I needed a few eggs, I cracked one egg and turned my back on Eli to dispose of the shell and I hear “WHACK!”–I turn around in time to see Eli decided to take it upon himself to crack the next egg and… fortunately he got it in the bowl!  So I let him do another one, “WHACK!” …the second one missed and ended up on the floor.  Oh well.  You have to learn somehow… while I was cleaning up Eli helpfully decided to get a new egg from the fridge and “WHACK!” .. but for some reason the yolk didn’t come out… and that’s when I realized he got an egg from the refrigerator door that Kris had hard boiled!  Sometimes you just can’t win!  But today he cracked two eggs perfectly for our King Cake.

The tradition of the King Cake dates back to the middle ages.  The cake is made to honor the wise men who followed the star to find Jesus.  Today the tradition is most popular in New Orleans where the cake is decorated with the Mardi Gras colors–created in 1872 by Krewe Rex.  Purple for Justice, Green for Faith, and Gold for Power.  Hidden inside a King cake is a plastic baby so as you eat the cake you’re looking for it just as the wise men were searching for Christ.  When I was a kid we often visited Grandpops and Grandma Bee in New Orleans and their tradition was that whoever found the baby got to be king for the day… although I think most people have the tradition that whoever finds it gets to bring the King Cake next year.

Here’s what we know of the visit from the Wise Men from Matthew:

Now after Jesus was born in Bethlehem of Judea in the days of Herod the king, behold, wise men from the east came to Jerusalem, saying, “Where is he who has been born king of the Jews? For we saw his star when it rose and have come to worship him.” When Herod the king heard this, he was troubled, and all Jerusalem with him; and assembling all the chief priests and scribes of the people, he inquired of them where the Christ was to be born. They told him, “In Bethlehem of Judea, for so it is written by the prophet:

“‘And you, O Bethlehem, in the land of Judah, are by no means least among the rulers of Judah; for from you shall come a ruler who will shepherd my people Israel.’”

Then Herod summoned the wise men secretly and ascertained from them what time the star had appeared. And he sent them to Bethlehem, saying, “Go and search diligently for the child, and when you have found him, bring me word, that I too may come and worship him.” After listening to the king, they went on their way. And behold, the star that they had seen when it rose went before them until it came to rest over the place where the child was. When they saw the star, they rejoiced exceedingly with great joy. And going into the house they saw the child with Mary his mother, and they fell down and worshiped him. Then, opening their treasures, they offered him gifts, gold and frankincense and myrrh. And being warned in a dream not to return to Herod, they departed to their own country by another way.

Now when they had departed, behold, an angel of the Lord appeared to Joseph in a dream and said, “Rise, take the child and his mother, and flee to Egypt, and remain there until I tell you, for Herod is about to search for the child, to destroy him.” And he rose and took the child and his mother by night and departed to Egypt and remained there until the death of Herod. This was to fulfill what the Lord had spoken by the prophet, “Out of Egypt I called my son.”

Then Herod, when he saw that he had been tricked by the wise men, became furious, and he sent and killed all the male children in Bethlehem and in all that region who were two years old or under, according to the time that he had ascertained from the wise men. Then was fulfilled what was spoken by the prophet Jeremiah:

“A voice was heard in Ramah, weeping and loud lamentation, Rachel weeping for her children; she refused to be comforted, because they are no more.”

But when Herod died, behold, an angel of the Lord appeared in a dream to Joseph in Egypt, saying,

“Rise, take the child and his mother and go to the land of Israel, for those who sought the child’s life are dead.”

And he rose and took the child and his mother and went to the land of Israel. But when he heard that Archelaus was reigning over Judea in place of his father Herod, he was afraid to go there, and being warned in a dream he withdrew to the district of Galilee. And he went and lived in a city called Nazareth, so that what was spoken by the prophets might be fulfilled, that he would be called a Nazarene.

The cakes are usually made during Carnival season anytime from Epiphany (Jan 6th) until Mardi Gras.  The best gluten free King Cake recipe I have found is gfjules King Cake Recipe  except I use the Namaste Perfect Flour Blend (Amazon).  If you haven’t tried King Cake I highly recommend it, it also makes a great breakfast!

You May Die From Eating This

Please read about how bad coconut oil is from the liberal CSPI organization and learn all about the danger of Coconut Oil from Michelle Obama and the CDC before proceeding.

The secret to great popcorn is coconut oil which despite being healthy for you has been banned in movie theater popcorn.  Now movie popcorn is worthless.  However, Kris and I have developed the perfect popcorn recipe… 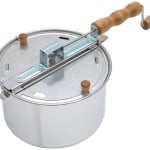 A good popper:  I like this Whirley Popper which Amazon has for $20.

Pretty much all these ingredients are cheaper at Miller’s… if you don’t have a Miller’s you can get them from Amazon:

Bonus: This is Gluten Free!