Purpose: Determine fastest small NAS/SAN OS/Appliance software solution for home running under ESXi.
Constraints: Candidates must support ZFS, be relatively stable (I narrowed down my candidate list by only choosing solutions that other people have used successfully), and be able to run CrashPlan for data protection.

napp-it, is a web gui for running on top of OpenIndiana, Solaris 11, Nexenta, and a few others written by Günther Alka (aka Gea).  It’s one command to install and you have a web-interface to your OS for setting up your storage appliance.  I think Nexenta’s GUI is a little more polished and faster (you get stats, graphs, Ajax, etc.), but Gea’s Napp-it is solid and very light-weight.  When joining a WinServer 2008 R2 domain Napp-It had no problems, but I had to drop to a command shell to tweak some settings to get Nexenta to join.  The ACLs were also a bit easier to get going in Napp-It.  Overall I would say Nexenta is a little easier to use than Napp-It (I usually don’t have to dig too far into the menus to find something in Nexenta), but Napp-it won’t eat up as much memory.
Below is the testing environment:

VM Configuration
Each OS was installed on the Seagate drive, it was given 4GB Memory, 30GB of storage for the OS and 40GB for the share/test drive, and both CPU cores.  During testing all other VMs were powered down.

Network
Gigabit network all around, using Cat-5e cables (sorry, I don’t have any Cat-6 cables) through as Cisco/Linksys E3000 (gigabit router) running TomatoUSB.    I shutdown all programs that I thought would use a significant amount of network traffic.

NAS Share configuration
Shares were mounted via CIFS/SMB.  I did not test NFS since I don’t have a system outside the Virtual Server that can mount NFS shares.  CIFS shares were using standard sync, the default compromise between safety and performance.
SAN Share Configuration
The difference between a NAS and a SAN is a NAS shares a file-system, multiple people can access that system at the same time.  A SAN shares volumes at the block level so it’s more suitable for running a database on top of, but only one client can mount a SAN target (volume) at a time.  iSCSI targets were mounted from my Windows 7 desktop.  I setup the iSCSI pools to use up to 128K blocks, after thinking about it I should have used 512 byte blocks since that’s what the OS would expect, ZFS will automatically use the smallest block-size it can to fit the file-system blocks so the block-size would have been whatever NTFS defaults to when formatting a 10GB drive.
Testing Software
Crystal Mark 3.0.1 x64.  Tests set to repeat 3 times each.  Test size 100MB, test data set to random.

Here are the test results. 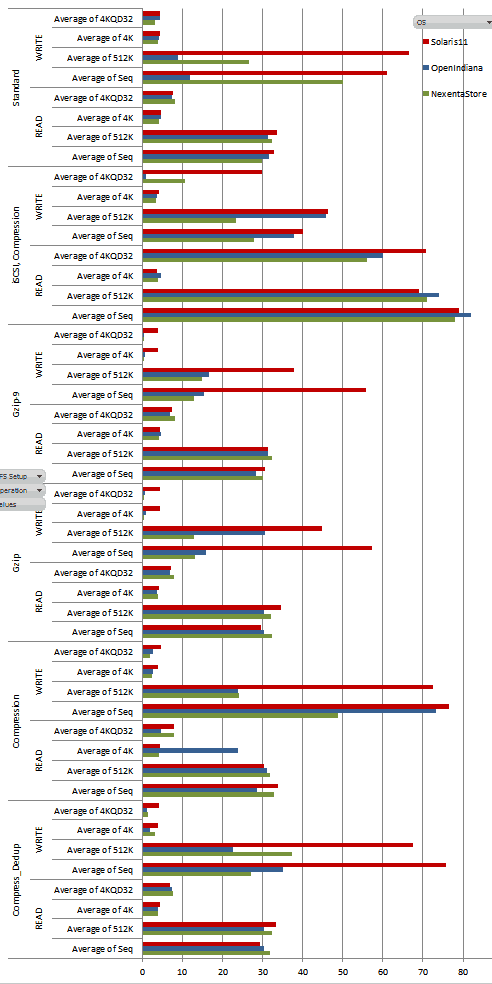 Below are some specific OS Graphs (note that the scale changes with each one). 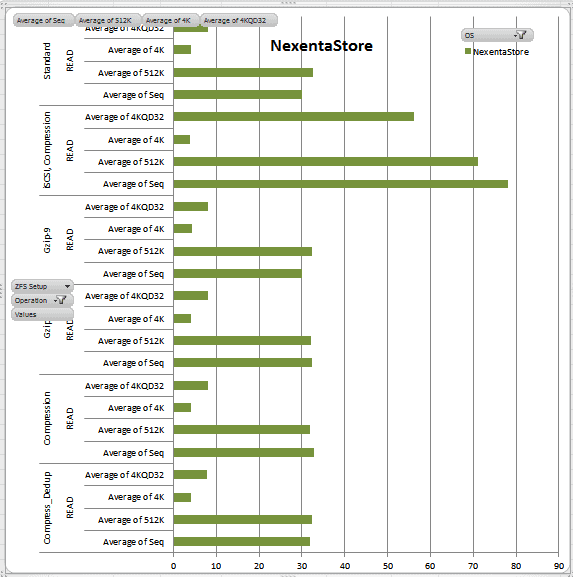 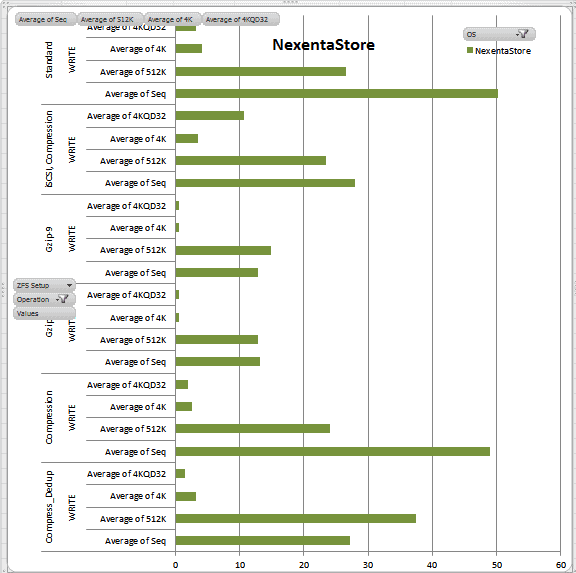 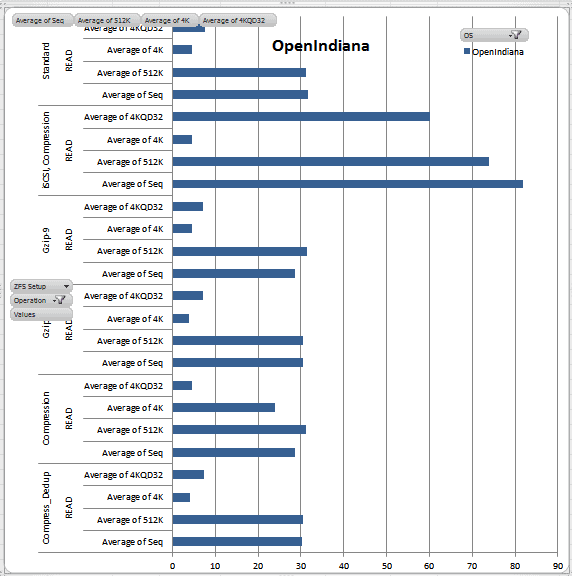 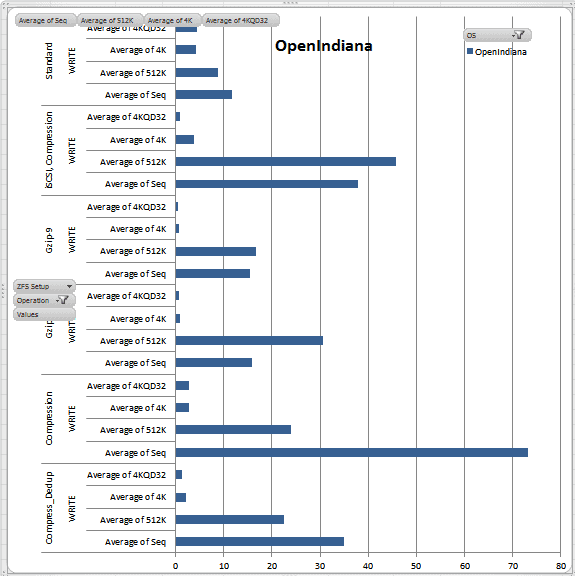 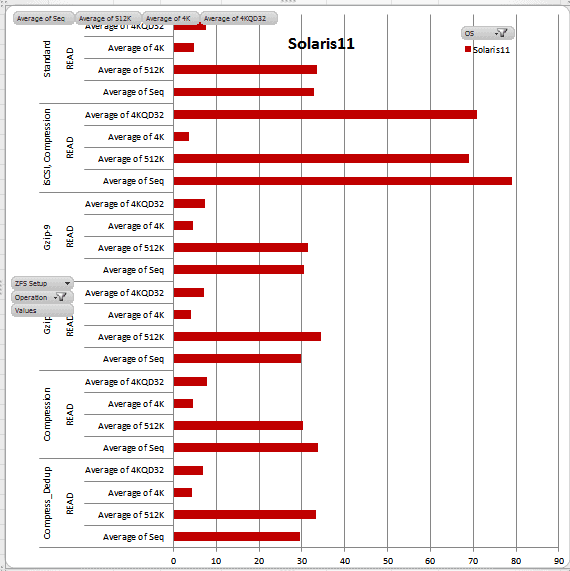 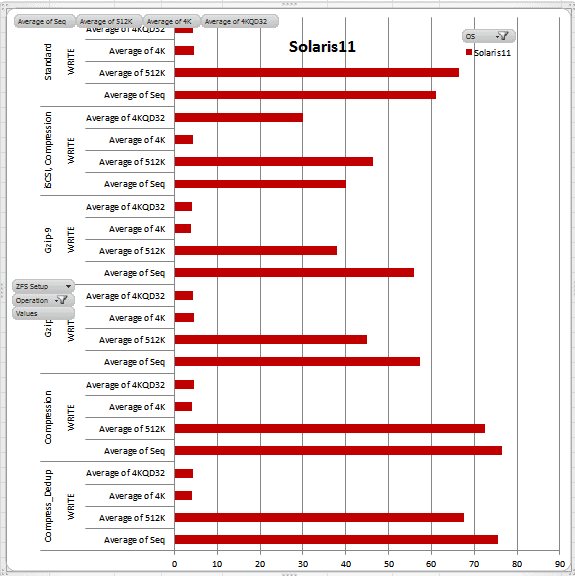