Happy World Backup Day!  Here’s a quick little Ansible Role I wrote to automate backup configuration for hordes of servers using Rdiff-Backup from an Ansible inventory file.  If you have no idea what I just said you may want to skip to “I’m Confused” at the very bottom of this post. 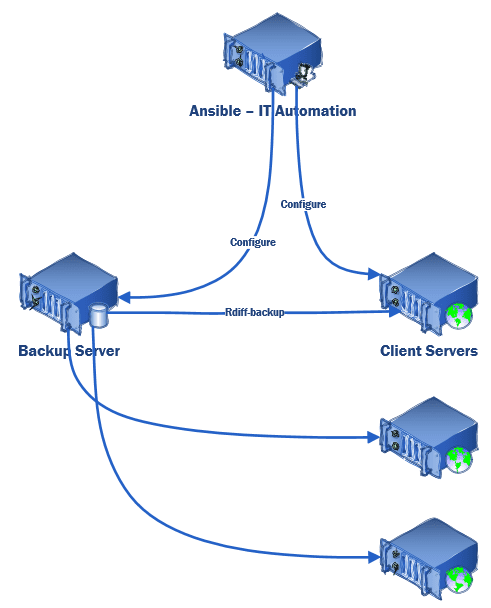 What does the Rdiff-Backup Ansible Role do?

The rdiff-backup-script role is available on Ansible Galaxy and I’ve uploaded the source to GitHub under the MIT license.

I have tested this on Ubuntu 16.04, but it should work with any distribution (CentOS, RedHat, Debian, etc.) as long as rdiff-backup is in the repositories available to the package manager.

On your Ansible server install the rdiff-backup-script role with:

Create a playbook file, rdiff-bakcup-script.yml with the contents:

Your Ansible inventory file would look something like this:

Run the playbook with:

Once the playbook has run all servers will be configured for backup which will occur at the next cron job run (defaults to 01:43 am).

The above playbook should be added to your site config so it is run automatically with the rest of your Ansible playbooks.  It would also be wise to have something like Nagios or Logcheck watch the logs and alert on failures or stale log last modified dates.

The backup script does not try to create an LVM snapshot and then backup the snapshot.  That would certainly be cleaner and I may add that ability later.  The default settings exclude quite a few files from the backup so make sure those exclusions are what you want.  One thing I excluded by default is a lot of LXC files.  If you’re using LXC you may want them.  Also always test a restore before relying on it.

Obviously, test it in a test environment and make sure you understand what it does before trying it on anything important.

This is a good day to check your backup strategy.  A few things to consider:

You might want to backup your computer.  I’d suggest looking at CrashPlan, SpiderOak, or BackBlaze which are all reputable companies that offer automatic cloud backup services for your computer.  The main thing you want to look at for pricing is how much data you have vs the number of computers you have. CrashPlan and BackBlaze charge by the computer but offer unlimited data so they would be ideal if you have a lot of data but few computers.  SpiderOak lets you have unlimited computers but charges you by how much space you use making it ideal if you have little data and many devices.