Trying to cut down on the noise and power usage of my old AMD Radeon 6870 (which uses about 130 Watts idle and 250 under load) I upgraded my GPU to the new NVIDIA GeForce GTX 750 Ti (~$150 depending on model), I decided on MSI’s version which has a massive heatsync and dual fans …and it is dead silent.  Even putting a full load on the GPU I can’t hear the fans at all.  I also noticed the EVGA model (which may be slightly louder but still very quiet) is shorter so it would work in smaller cases.

Although I haven’t verified it at idle power consumption is supposed to be around 9 Watts driving two monitors, and 60 Watts under load.  Since I leave my computer on 24/7 that should cut down my energy costs by $80/year so the card could pay for itself in two years… but wait, there’s more! 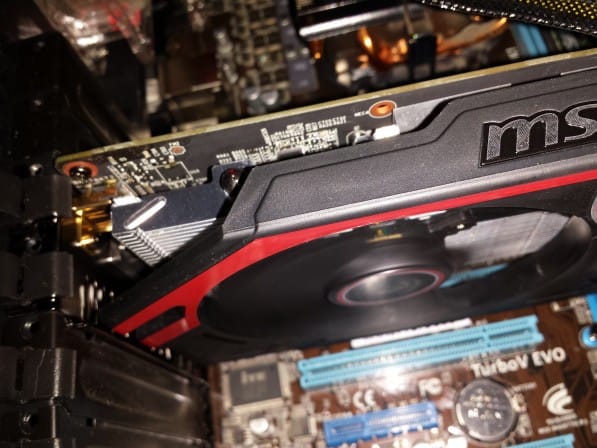 One thing in particular about this card is it is very low wattage which makes if efficient for mining crypto-currency like Bitcoins… which I’ve been wanting to try but haven’t because until now my GPU has had too loud of a fan when it’s under load.  The GTX 750 Ti is probably the best GPU for mining considering the Hashrate per Watt ratio.

To see what sort of performance I’d get I test mined a few currencies to get the hash-rates for various algorithms.  Some algorithms in use today are SHA-256 (Bitcoin), Scrypt (Litecoin), Scrypt-N (Vertcoin), X11 (Darkcoin), Kekkak (Maxcoin), Quark (QRK).  SHA-256 is what Bitcoin uses and it’s pretty pointless to mine coins with an SHA-256 algorithm because of the ASICs out there that provide an incredible hashrate compared to what a GPU can provide.  I think the best algorithms for a GPU to mine are Scrypt and Scrypt-N.  Scrypt ASICs are coming on the market so coins using Scrypt-N algorithms will probably be the best ones to mine in the future.

Hashrates of the GTX 750 Ti

I found a few websites that show the most profitable coin to mine based on current exchange rates, in particular CoinWarz.  My cost per kWh is $0.0747 so I put those values and the hash rates into CoinWarz’s Crypto Currency Mining Profitability calculator and without trying to always mine the top coin it looks like it’s fairly easy to mine $0.50/day (or $15/month) after taking energy into account.  This may not seem like much, but consider the GPU costs around $150.00 that’s a 120% annual return (now this will likely go down as mining difficulty increases).  Unfortunately I think CoinWarz takes a little too long to update so I think what it shows you is what the best coin to mine would have been, but if you see a few coins that are consistently profitable you can target those.

(okay, so to be honest, this is not my first mining experience, I actually tried mining a few BitCcins several years ago but quickly discovered the energy and noise of the GPU fan wasn’t worth it).

My second mining experience… how to get started.

You can pick any coin you want.  I am most interested in coins with the Scrypt-N algorithm and they appear to have just been created this year so they’re relatively easy to mine.  So I started with EXECoin.  From the the EXECoin download page I got their Light Wallet (ExeLite) and their CUDAMiner (CUDAMiner is the program you want when mining with an Nvidia GPU).

Step One.  Open the Wallet and get a Receiving Address.  The receiving address is safe to give out, there’s a corresponding private key that you don’t want to give out. 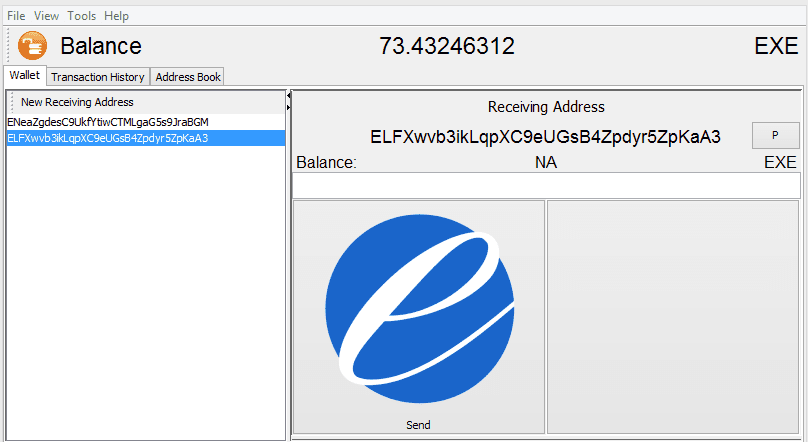 One neat thing about this wallet is the ability to create a paper wallet and print it out for offline cold storage without creating it on your computer.  You can continue receiving coins at that address but you won’t be able to access those coins until you import the private key back into EXELite by typing it in or using your webcam to scan the QR code (just don’t ever lose that paper). 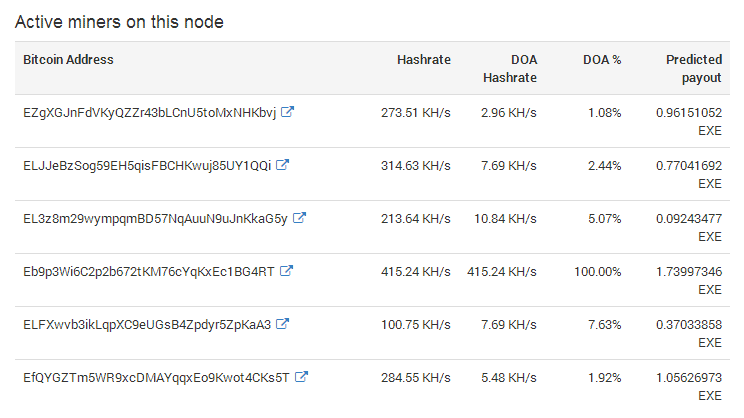 It’s possible to mine solo, but with a lot of currencies it can take days, weeks, and even longer to actually find coins.  What a mining pool does is allow several miners to pool their resources together and mine as a single unit.  When the pool finds coins it splits it up evenly  among the miners (usually after taking a small fee between 0%-2% which I’m sure doesn’t even cover the cost of running the pool).  Pools typically pay out daily but some pay out more often.

Most coins have a list of mining pools you can use, here’s EXECoin’s List of Pools.  The two things you want to consider when picking a pool are latency and node fees (I typically try to find the lowest fee pool with under 100ms).  I thought the P2Pools looked interesting so I did a quick ping and found the lowest latency for me was west.exe.p2pools.info:9173.

After downloading and unzipping Cudaminer here’s the command I ran: 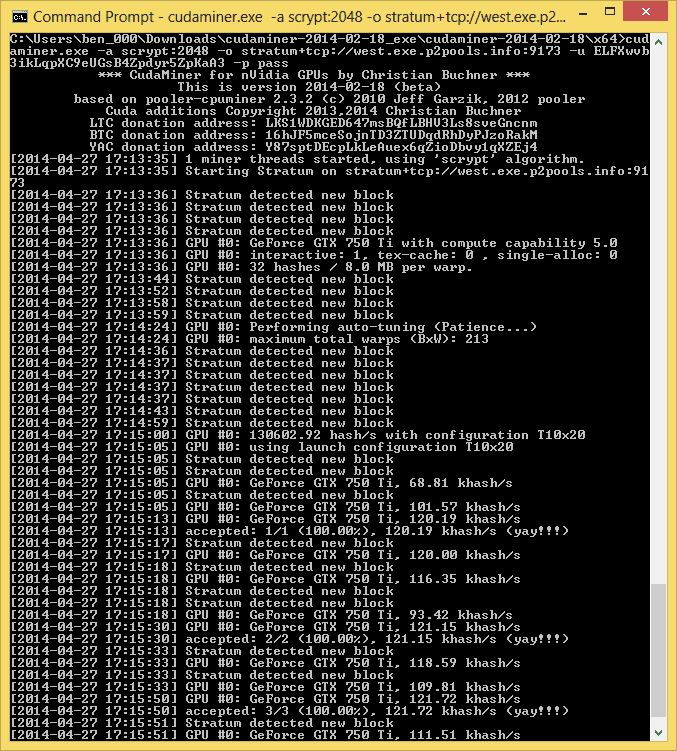 (you’ll obviously want to change the receiving address to your own unless you want to donate some mining time to me).

The N factor will increase over time.  For example, on July 2015 you’ll need to change the N factor from 2048 to 4096.  This frequent change in the N factor is what makes EXECoin ASIC resistant which will help hold the value of your coins.

Your address receives your coin, and you don’t need to be online.  At anytime you can view your EXECoin transactions at http://explorer.execoin.net/address/ELFXwvb3ikLqpXC9eUGsB4Zpdyr5ZpKaA3  Of course, without the private key which is stored in your wallet (on your computer or on paper if you made a paper wallet) you can’t spend your coins.  It’s a great idea to backup your wallet, and important to keep any media that you store the wallet on encrypted.

There are quite a few other coins, for now I’m sticking with coins that use Scrypt-N because I like having some ASIC resistance.  I also started to mine some Vertcoin, the process was pretty much the same.  Download the wallet to get a receiving address, find a pool, and run Cudaminer against that pool with my Vertcoin receiving address. The Cudaminer from EXECoin’s website works well to mine Vertcoin or just about any other coin, you’ll just need to change the algorithm if you’re not mining Scrypt-N.

Mining these ALT-coins is actually more profitable than mining Bitcoin.  In fact, you can mine ALT-coins and trade them in for Bitcoins for cheaper than you’ll mine a Bitcoin.  I’m not sure why this anomaly exists except perhaps that there is the expectation that some of these newer coins will increase in value more rapidly than Bitcoins so Bitcoin holders are willing to pay a premium for them.

There are actually mining pools that automatically switch to the most profitable coin based on their BTC (Bitcoin) exchange rate.  I looked around at a few and I think CoinSolver looks like a pretty good one, it has a Scrypt pool and is one of the few that also has a Scrypt-N pool.  I think it’s a little more up to date than CoinWarz for the most profitable coin and it mines whatever coin has the best exchange rate against BTC and automatically pays you out in BTC (so you’ll need to download the Bitcoin wallet to use it).  Once you get enough BTC–maybe after a year or so of mining you could exchange it to USD if you don’t want to hold Bitcoins.  Another strategy is to mine the most profitable coin and Exchange it into BTC, then buy other alt-coins.  I wouldn’t call this investing, this is mere speculation like buying Gold or Silver or trading other currencies.  But it can be fun.  I’d take speculating mining power on crypto-currency over gambling at a casino any day.  |:-)

Overall, I’m pretty happy with the Nvidia GTX 750 Ti.  I don’t think I’d go out and buy a GPU just for mining but if I’m going to have one anyway I may as well put it to work.  And If you want my old GPU it will be on Ebay shortly.

And of course, if you want to donate some coins to me: