What Is a Rubber Dome Keyboard? 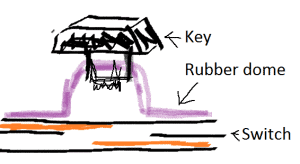 Take a look at your keyboard.  Push a few of the keys.  It probably feels mushy, and it’s most likely a rubber-dome keyboard.  These weren’t made for typing, they were made to be cheap.  You have this dome of rubber that the key sits on, as you press the key feels mushy until the rubber dome sort of collapses and closes the circuit registering the keypress.

A mechanical keyboard by contrast has a real switch and most give audible and tactile feedback when the switch engages.  These are much more expensive to produce, but they were very common back in the 80s, and are far superior to most  keyboards made today.  When people spent $5,000 dollars on a computer it made sense to put $500 dollars into the keyboard!  On the left is an image of IBM’s infamous buckling spring key switch, which is by many considered the best keyboard switch ever designed.  It simply includes a spring, that when pressed far enough, buckles, causing the spring to hit the wall making an audible click as well as moving the plate to engage the circuit.

There are a variety of switch types, the most popular and easiest to find keyboard switch on the market today is the Cherry MX mechanical switch.  Cherry style switches can be identified by the plus on the stem which the keycap fits over.  It comes in a variety of switch types for different styles of typing, designated by colors… here are some of the most popular models and how they behave.

Cherry MX Blue – An audible click and tactile feedback on engagement.  This switch is popular for typing activities and generally preferred among authors and programmers.  It does make a loud click noise so I don’t own this style but I have typed on blues and they are a fantastic typing experience.  The one thing I don’t care for in this switch is the reset point is a bit higher than the activation point which requires a little more return travel to re-engage.  It’s not really a big deal, just my preference.  Most typists actually prefer this as it prevents an accidental double-strike and most gamers do not like this.

Cherry MX Red – No audible click, and no-tactile feedback.  This is a linear switch with consistent force all the way through.  Because there’s no bump on engagement to “slow you down” and the reset and activation point are the same this switch is very popular with gamers who need to rapidly press a key as quickly as possible.  There is no audible click, but they are still noisy if you bottom out the keys.

Cherry MX Brown – No audible click, and light tactile feedback.  This is my favorite switch, you get tactile feedback, the activation point is close to the reset point and there’s no audible click (which is a bonus if you don’t want to wake people up, however I should mention despite the keys being “silent” they’re still much louder than a rubberdome).  If you’re going to get one all purpose switch (and most of us probably should–switching between different key types all the time probably isn’t that helpful) I think the MX Browns are great.  My only complaint with browns is I feel the tactility could be a little sharper.

Cherry also makes a few other switch types with a stiffer spring that are less common but can be found as an option on high end keyboards.

Cherry MX Green – Similar to the blue but a stiffer spring, this isn’t the same as a buckling spring but probably about the closest you can get in the Cherry switch.

Cherry MX Black – Just like the red but a stiffer spring

Cherry MX Clear – Similar to the brown but a stiffer spring.  If this was more common I would consider using this over the browns since I prefer a heavier switch.

Cherry MX isn’t the only game in town but they’re manufacturing the most keys today.  There are also Topre, ALPS, Kailh, and of course the traditional Buckling Spring Switch. This switch was found in the IBM Model F and IBM Model M.  It includes a spring that sits inside each key, as the key is depressed passed a certain point the spring buckles, causing it to whack the side of the key causing tactile feedback and an audible click as the flipper hits the plate.  While this is a fantastic keyboard it’s very loud.  I had to stop using it when I got roommates.  Unicomp bought the rights and manufacturing equipment from IBM so it is still possible to buy a brand new Model M Keyboard with a modern layout today.

Before purchasing a mechanical keyboard.  It’s best to test out the switches.  4-key Cherry MX samplers usually have the most common Red, Black, Blue, and Brown switch.

Generally speaking if you deviate from the most common Red, Blue, or Brown switches your options are going to be more limited and more expensive, but you can purchase 12-key samplers to try even more switch types.

Things To Consider In a Keyboard

One of the major issues with modern keyboards is ghosting, especially if you’re left handed and play games.  Keyboard manufacturers build keyboards to handle simultaneous keystrokes in the WASD region, which is great if you’re right-handed, but awful if you’re left-handed and using something like OKL; or PL:’ and you find you can’t press O, K, and space at the same time without random keystrokes being sent to the computer.  Nicer keyboards tend to have 6KRO (6 Key Rollover) which means you can press any 6 keys simultaneously and have them all register correctly.  Some keyboards also support NKRO (N-Key Rollover) which means you can literally press every single key on the keyboard at the same time without losing a keystroke.

PS/2 is superior.  Most modern keyboards have a USB connector, but that doesn’t mean it’s superior to PS/2.  The “legacy” PS/2 port has several advantages.  First it supports NKRO (some higher end keyboards can do NKRO with USB but it’s not as common), and 2nd on USB your computer polls the keyboard periodically thousands of times a second.  The conversation between the keyboard and computer goes like this:

And this can result in a few milliseconds delay between the time you press a key and your CPU realizes it.  By contrast on a PS/2 Connection there is no polling, instead PS/2 sends an interrupt to the CPU:

For me and most people this won’t matter.  Pro-gamers may prefer PS/2.

I prefer full size keyboards.  One thing the bothers me is the wasted space above the numpad.  So I always look for keyboards that utilize the space… it’s a great spot to have volume controls like this Ducky keyboard provides. 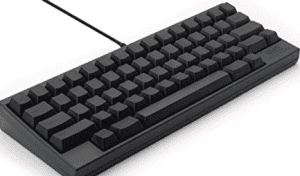 You can get smaller keyboards without the numpad/tenkey, or even smaller without the arrows, some like the Happy Hacking Keyboard don’t even come with function keys.  Instead you have to hit modifier keys to get to the keys you want.  I think this is a trick to sell you less keys.  I use all the keys fairly often so I prefer to have a full keyboard without having to use modifier keys. 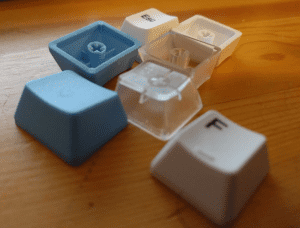 Keycaps are easily swapped out later so not as important.  But the two most common plastic materials are PBT and ABS.  PBT is higher quality, wears slower and is more expensive.  ABS is cheaper and if there is any texture on the keys it wears faster.  Caps often use subliminal dye or are doubleshot (two colors of plastic molded together) for the lettering which means the key markings will practically never wear off.

The two most popular layouts are US ANSI and International ISO.  Chances are you’ll pick what you’re used to depending on the country you’re in.  The two have a different layout especially when it comes to the position of special characters.  Since I learned to type in the United States I always get the US ANSI layout (I would probably prefer a larger enter key… but I’m not willing to sacrifice the size of a left-shift).

My Favorite Keyboards (so far)…

After testing a number of keyboard brands Cooler Master and Ducky are my favorites among keyboards you can still buy today for a reasonable price.  The keyboards are well built, nice and heavy, and are priced well considering their quality and durability.  They both have models with an extra 4 keys above the numpad so as not to waste that area.

Here are the two that I use every day…

My current keyboard is an old Ducky Premier with Cherry MX brown switches.  It uses quality PBT keys, and has a nice blue-grey color scheme.  Nothing fancy about it.  This model has been retired but there are plenty of newer Ducky Keyboards.

At work I use the Cooler Master Masterkeys Pro, the LED backlighting is annoying so I turn that off, but I really like the smooth ABS keycaps that come with it.

Lastly, there is one non-mechanical keyboard that is fantastic.  And that is the Microsoft Sidewinder X4.   I must say this is the best rubberdome keyboard ever made.  I like the feeling of it better than the more expensive Topre keyboards.  Unfortunately I wore mine out and they don’t sell them anymore.

I like them for the same reason I like buttons, knobs, and switches over touchscreen interfaces.  There is no substitute for physical feedback.  On a rubber-dome you can’t tell when a key engages so you press it all the way and bottom out every time.  With a mechanical keyboard you quickly learn bottoming out your keys isn’t necessary.  Instead you press the key and at some point you feel and hear it pass the activation point so you stop pressing and release it.

Another advantage is the durability, Cherry MX switches are MTBF rated for 50 million keypresses.  Older keyboards like the Model M and Model F still work today despite being over 30 years old.

What about Laptop Keyboards?

Unfortunately most laptops are built with cheap keyboards and short key-travel.  While there are a few exotic models that come with mechanical keyboards, aside from those the best laptop keyboards in general are going to come with Gaming or Business Class Laptops which I mention on my laptop buying guide.  Of those, the Lenovo ThinkPad brand is well known for having the best laptop keyboards in the market.  They’re still rubberdome, but less bad than most.