The Way of the Righteous and the Wicked

1 Blessed is the man
who walks not in the counsel of the wicked,
nor stands in the way of sinners,
nor sits in the seat of scoffers;
2 but his delight is in the law of the Lord,
and on his law he meditates day and night.

3 He is like a tree
planted by streams of water
that yields its fruit in its season,
and its leaf does not wither.
In all that he does, he prospers.
4 The wicked are not so,
but are like chaff that the wind drives away. 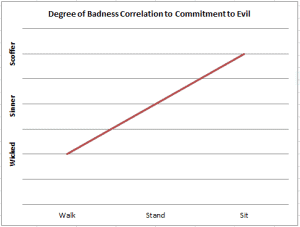 This is one of my favorite passages, it uses three parallel trilogies that increase in intensity describing what a blessed man does not.  He does not walk, stand, or sit, each action becoming more committed to evil than the previous action.  …with the wicked, sinners, or scoffers signifying a progression of occasional ungodly influence (wicked) to outright deliberate and intentional evil (scoffers).

I see verse two as what prevents the man from unintentionally going down that path to being a scoffer.  Continually reading and meditating on Scripture enables him to recognize ungodliness so that he doesn’t “walk” near it in the first place.

The man becomes like a tree that is transplanted near streams of water–and as a result will eventually bear fruit and prosper.

The Hebrews word for wicked here doesn’t necessarily mean complete and utter evil; it usually means a man without a relationship with God.  He may still do good works, but God determines he is evil since God knows the heart of man.

Chaff = husks of grain that blow away in the wind.  The main idea is the wicked are worthless, they have no value to God.  I don’t think David intended this but I could also see it meaning the wicked go wherever they are influenced to go.  They have nothing to constrain their wicked desires or passions.

God will separate the righteous and wicked.  They will not be together in judgment.

The way = one’s whole manner of life, from what directs it to what is produced.

The Lord knows the way of the righteous (being known by God is equated with Salvation), the wicked (those who do not have a relationship with God) will perish.