Merry Christmas!  Looks like a white Christmas for us… It’s been snowing almost non-stop for the last few days.

One of the things I’ve started to understand more this year is Christ’s humility, not only in dying on the cross to offer us salvation, but also in leaving heaven and revealing Himself by stepping into His creation and becoming a man.  Here’s an except from our church newsletter:

He deserved the worship of myriads and myriads of angels. He enjoyed unbroken fellowship with the Father from eternity past. He was untouched by sin and human sinfulness. He was unaffected by this creation and its fallenness. He had the conveniences, pleasures, and joys of Heaven. The glory of that place was His.

If He were to leave that and come to the greatest palace on earth, to be fawned over by thousands of servants and waited on hand and foot, it would be an infinite condescension. If He were to leave Heaven and have His every need met, His every wish fulfilled, and receive the best treatment ever afforded a King, the incarnation would still be an unimaginable humiliation.

Osman, Jim. “A Savior Who is Christ the King” Kootenai Communicator Dec 2015

The gift that God gave is something to ponder. 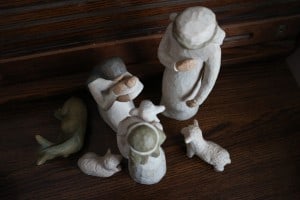