I’ve been a long time Quicken user, my dad taught me to use Quicken for DOS to track money in my “Bank of Dad” account. My current Quicken file which I started in college after opening my bank account has data back since 2001. For the last 12-years I’ve loyally purchased a new version of Quicken every couple of years.  Unfortunately Quicken has started going downhill about the time you acquired Mint and it’s getting worse.  When I bought Quicken 2013 it was pretty buggy, so I decided to give you a year and upgrade to Quicken 2014 which I assumed would fix most of the issues.  Boy was I ever wrong.

I’ve been so frustrated with Quicken that I have tried other solutions but they fall short. Mint, GnuCash, and MoneyDance don’t have nearly all the features I use. For example, Quicken’s Projected balances is unmatched by any competitor.  It knows I pay my credit cards in full every month, every recurring or future transaction is reflected in there so I can look out at the next 90 days and make sure none of the accounts are going to go into the red.  I don’t know of another tool that has cash flow management like this.

Another great feature is investment tracking, Quicken is pretty bad at managing asset allocation, but it does a great job at tracking performance and stock splits and cost basis.  I don’t know of another personal finance management software that can produce an IRR (Internal Rate of Return) report with a graph like this.

So, let’s get to the problems.  Overall there’s a lack of polish.  For example, QC didn’t catch this question. 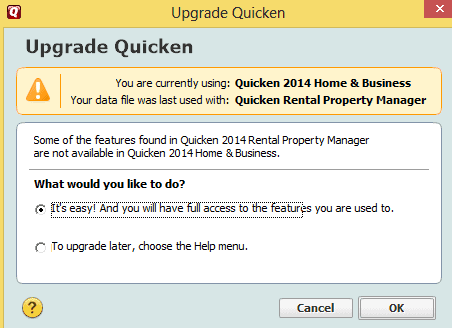 Anyway, I tried to upgrade but it takes me to this page with a broken image and an “Add to Cart” button that doesn’t do anything.  (Did anybody even check this before it was released?)  I finally figured out how to get the Rental Property edition by going to another page but it wasn’t obvious. 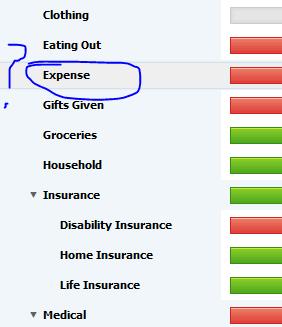 My budgets have been wrecked.  Budgeting was very easy in Quicken 2011, since 2013 it looks like some sort of hybrid Mint/Quicken budget and the interface is very slow–I’m assuming because it has to render the red and green bars that I don’t really care for.  If all I’m doing is entering a number it shouldn’t take longer than entering a number on a spreadsheet. What is this Budget item for “Expense”?!  I don’t have an “Expense” category, I don’t want an Expense category.  When I right-click the Expense category there’s no option to remove it.  When I view the transactions in “Expense” it’s showing me items that are actually in other budget categories like Life Insurance, Travel, transfer to 401k, and Utilities!  Is the budgeting tool double counting my expenses?  I don’t know!  It appears to be some catchall category for every outflow of cash but I don’t want it.  There’s another one like it called “Office Expenses” that has no reason to be in my budget that seems to capture random transactions that have nothing to do with Office Expenses, and I don’t even have an Office Expenses category and I’d like it gone as well.  I don’t want these in my budget.

The Budget Reports are broken.  One thing that’s important to me is I budget some transfers to make sure we maintain a positive cash-flow (or manageable deficit spending).  For example, if I regularly transfer money from checking to savings I actually budget the transfer because I need to know that the money isn’t available for spending.  When I run the “Current Budget” report I have ‘Non-Zero actual/budgeted’ selected but some (not all) of my budgeted transfers don’t show up on the budget report even though they are in the budget!  I can’t manage my budget with buggy reports like this!

Fortunately, I happened to have a saved custom budget report from a previous version of Quicken that still works… sort of.  I can run the report and it shows Non-Zero actual/budgeted items for transfers like it should.  However, I often like to run a report that fits on a single page to give to Kris and to do that I hide the subcategories.  Whether I’m showing or hiding sub-categories my Budget Net Difference should be the same right?  Nope.  Showing sub-categories I have a Budgeted Net Difference of $200 per month.  If I hide sub-categories I have a Budgeted Net Difference of several thousand per month.  Hidden Sub-Categories should roll-up into their parent categories on the report (and they used to in Quicken 2011).  Now the report is just wrong in 2014.  So right now the only way I can get an accurate budget report is to use the saved custom budget report I made in a previous version of Quicken, and it only works if I show sub-categories!  That is bad Intuit.  Bad.

Also, the entire reason I upgraded from Quicken 2013 to Quicken 2014 is the latter version was supposed to fix a lot of bugs synchronizing to mobile devices that were in Quicken 2013.  However, things haven’t improved much for me.  Whenever I sync Quicken will do one of the following:  It will hang synchronizing to the cloud but never finishes (I even let it go for an hour).  Or it will say “Com Error” and crash or it will crash with error code 7237 while trying to send budgets. 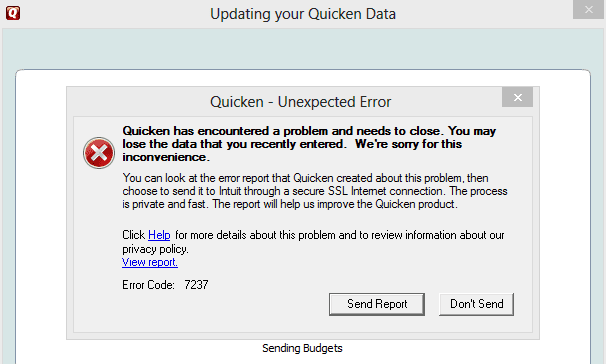 I just want the software to work.  I’ve been in this mess for one year, and due to there not really being a good competitor I’ll try to tolerate some bugs for a little while longer.  My patience won’t last forever.  Intuit, get your software working!