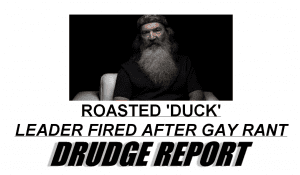 I saw the above headline on the Drudge Report last night.  I just discovered the show a few months ago and have been enjoying it, it’s a great clean humorous show with good American and Christian values.  Normally I just read the headlines, but in this case I had to see what all the fuss was about.

Excerpts from http://www.hollywoodreporter.com/live-feed/duck-dynastys-phil-robertson-indefinite-666808, cited December 19, 2013.  (my emphasis noted in bold):

“We are extremely disappointed to have read Phil Robertson’s comments in GQ, which are based on his own personal beliefs and are not reflected in the series Duck Dynasty,” A&E said in a statement. “His personal views in no way reflect those of A+E Networks, who have always been strong supporters and champions of the LGBT community. The network has placed Phil under hiatus from filming indefinitely.”

GLAAD on Wednesday condemned his remarks as “some of the vilest and most extreme statements uttered against LGBT people in a mainstream publication” and said “his quote was littered with outdated stereotypes and blatant misinformation.”

“Phil and his family claim to be Christian, but Phil’s lies about an entire community fly in the face of what true Christians believe,” GLAAD spokesperson Wilson Cruz said. “He clearly knows nothing about gay people or the majority of Louisianans — and Americans — who support legal recognition for loving and committed gay and lesbian couples. Phil’s decision to push vile and extreme stereotypes is a stain on A&E and his sponsors, who now need to re-examine their ties to someone with such public disdain for LGBT people and families.”

GLAAD responded to A&E’s suspension, commending the network for its swift decision. “What’s clear is that such hateful anti-gay comments are unacceptable to fans, viewers, and networks alike,” GLAAD’s Cruz said late Wednesday. “By taking quick action and removing Robertson from future filming, A&E has sent a strong message that discrimination is neither a Christian nor an American value.”   <– I don’t think I’m the only one that sees the irony in this!

The Human Rights Campaign also slammed Robertson for his statements.

“Phil Robertson’s remarks are not consistent with the values of our faith communities or the scientific findings of leading medical organizations,” president Chad Griffin said in a statement. “We know that being gay is not a choice someone makes, and that to suggest otherwise can be incredibly harmful. We also know that Americans of faith follow the Golden Rule — treating others with the respect and dignity you’d wish to be treated with. As a role model on a show that attracts millions of viewers, Phil Robertson has a responsibility to set a positive example for young Americans — not shame and ridicule them because of who they are. The A+E Network should take immediate action to condemn Phil Robertson’s remarks and make clear they don’t support his views.

I’ve only watched the first season, but a positive example is exactly what Phil sets.  What did Phil say that was so “vile and extreme”?  I decided to read the actual interview here http://www.gq.com/entertainment/television/201401/duck-dynasty-phil-robertson and what they’re so offended by is something Paul wrote to the Corinthians.  Here’s an excerpt from the interview:

What, in your mind, is sinful?

There is nothing hateful or vile in Phil’s remarks.  A&E didn’t suspend Phil Robertson for vile or extreme remarks against homosexuals.  They didn’t suspend him for discriminating.  A&E suspended him for his belief, or rather, talking about his belief in the the Bible.  This sounds like discrimination against Phil’s beliefs to me.

It will be interested to see how this plays out.  As far as I can tell there are a lot of fans outraged by the decision all over Facebook, Youtube, Twitter, etc.  I even read a comment from a gay fan saying that even though he disagrees with Phil he thinks Phil should have the right to free speech.  The governor of Louisiana has also criticized A&E over their decision.

'My mission today is to go forth and tell people about why I follow Christ'...
FLASHBACK: Vowed to Quit A&E if Network Banned Talk of God or Guns...
No. 1-rated in cable history...
PALIN DEFENDS...