We owe much to the reformers.  Many were involved, most notably Ulrich Zwingli and later John Calvin, but Martin Luther is said to have started the Reformation by posting the 95 Theses to the door of the Castle Church in Wittenberg.  He intended to start a discussion, but the Church did not take it too kindly.

Martin Luther believed through his study of Scripture, especially Romans, that forgiveness of sins was a gift that God alone could give, and those that taught people could receive forgiveness from the Pope through indulgences (which were used to fund massive projects for the Roman Catholic Church) were in error.

Why does the pope, whose wealth today is greater than the wealth of the richest Crassus, build the basilica of St. Peter with the money of poor believers rather than with his own money?
— Martin Luther, The 95 Theses

Luther hoped he could change (reform) the Roman Catholic Church, but instead he was labeled a heretic and excommunicated.  The Church wrote him a letter saying he did not have their permission to go to heaven which Luther later burned publicly.

I admire Luther the most for the doctrine of Sola Scriptura–that the Scripture is the supreme authority.  It does not mean we don’t have others in authority over us–but all authorities are subject and corrected by the Word of God.

Unless I am convinced by the testimony of the Holy Scriptures or by evident reason-for I can believe neither pope nor councils alone, as it is clear that they have erred repeatedly and contradicted themselves-I consider myself convicted by the testimony of Holy Scripture, which is my basis; my conscience is captive to the Word of God. Thus I cannot and will not recant, because acting against one’s conscience is neither safe nor sound. God help me. Amen.
— Martin Luther, at the Diet of Worms

1. The Reformation was started by:

3. The reformation is said to start when Martin Luther published

A. The Diet of Worms
B. 95 Theses
C. A Treatise on Good Works
D. An Open Letter to Christian Nobility

A. The Diet of Worms
B. Johann Eck
C. Rome
D. Frederick of Saxony

6. Emperor Charles V Commanded Luther to appear in order to….

A. Defend and Debate his ideas.
B. Murder him during passage to the trial
C. Force him to recant
D. Repent of his Heresy

7. What belief was NOT part of Luther’s theology?

A. The Pope has no special relationship to God
B. Scripture is the sole source of authority for Christians.
C. The bread and wine used during Communion only symbolically represents the flesh and the blood of Christ.
D. Salvation is by Faith Alone.

8. The 95 theses were widely distributed thanks to….

A. The Internet
B. The Printing Press
C. The Telegram
D. Lots of Facebook Likes

11. The NLCS and ALCS series always occur on Reformation Month. They are…

A. Rivaling Lutheran Synods
B. Where the Arminian Lutherean Christian Synergists and the National Lutheran Calvinist Soteriology groups get together to debate theology.
C. A conference of two groups: the Advent Libertarian Catholic Supralapsarianists and the Nicene Liturgist Creed Semi-Pelagianists where they get together and enjoy food, fellowship, and try to understand each other and resolve their differences.
D. Have nothing to do with the Reformation

A. Disputation Against Scholastic Theology
B. Disputation on the Power of Indulgences
C. On the Papacy in Rome Against The Most Celebrated Romanist in Leipzig
D. The Misuse of the Mass 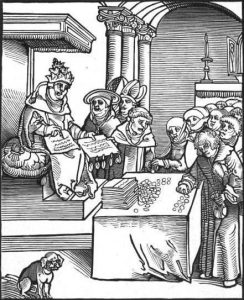 13. What was an Indulgence?

A. A way to reduce the duration or amount of punishment one has to pay for their sins.
B. Self-gratification through wealth, food, sex, or social status.
C. The Catholic luxurious churches
D. Over-tolerance of others that makes Christians passive toward sin

A. Hades
B. Purgatory
C. Hell
D. The Nether

15. Luther was excommunicated by the Pope for:

A. Marrying a Nun which was not allowed for monks (or nuns).
B. Calling the Pope an “Antichrist”
C. False Teaching
D. Condemning Infant Baptism

A. Allow people to suffer less in Hades who bought it
B. Pay for the emperor to send runners to the mountain to get snow for ice cream
C. Reduce the number of worms people have to eat in Hell
D. Finance the construction of St. Peter’s Basilica in Rome

17. At Leipzig, Johann Tetzel was asked by a nobleman if he could buy an indulgence for a future sin. Tetzel agreed as long as the nobleman paid at once. What pre-paid sin did that nobleman later commit?

A. Murder
B. Adultery
C. Eating worms
D. When Tetzel left Leipzig the nobleman attacked him along the way, gave him a beating, and sent him back to Leipzig empty handed.

19. Which Famous Hymn did Luther write?

A. A Mighty Fortress is Our God
B. Amazon Grace
C. How Great Thou Art
D. When I survey the Wondrous Cross

20. When Luther Went into Hiding, how long did it take him to translate the NT into German?

21. What is something Luther loved to eat?

A. A Diet of Worms
B. Waldorf Salad
C. Meat Pies
D. Jibaritos

22. Who did Martin Luther Marry?

23. What Reformation Anniversary is it?

26. Which Book is NOT a book Luther tried to remove from the Canon?

(answer on the door)

For by grace you have been saved through faith. And this is not your own doing; it is the gift of God, not a result of works, so that no one may boast.
— Ephesians 2:8-9, ESV