I ran some performance tests comparing the Intel DC S3700, Intel DC S3500, Seagate 600 Pro, and Crucial MX100 when being used as a ZFS ZIL / SLOG Device.  All of these drives have a capacitor backed write cache so they can lose power in the middle of a write without losing data.

Here are the results…. 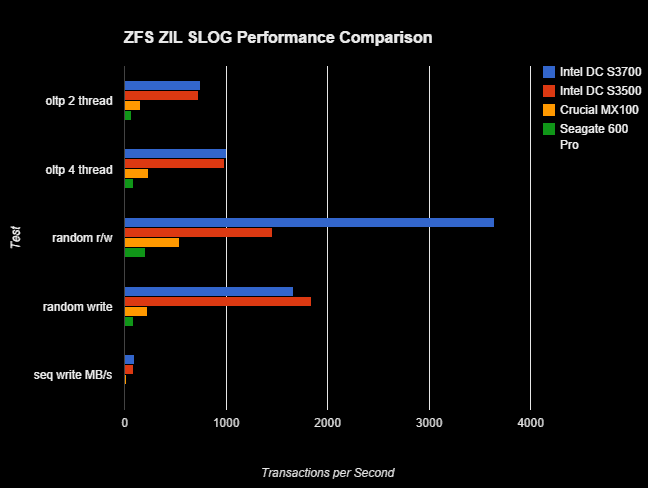 The Intel DC S3700 takes the lead with the Intel DC S3500 being a great second performer.  I am surprised at how much better the Intel SSDs performed over the Crucial and Seagate considering Intel’s claims are not as great as the other two… Intel claims slower IOPS, and slower sequential performance yet it outperforms the other two SSDs.

I should note that both the Crucial and Seagate improved performance over not having a SLOG at all.

I would like to know why the Seagate 600 Pro and Crucial MX100 performed so badly… my suspicion is it may be the way ESXi on NFS forces a cache sync on every write, the Seagate and Crucial may be obeying the sync command while the Intel drives are ignoring it because they know they can rely on their power loss protection mechanism.  I’m not entirely sure this is the difference but it’s my best guess.

Zpool is 3x7200RPM Seagate 2TB drives in RAID-Z, in all tests an Intel DC S3700 is used as the L2ARC.  Compression = LZ4, Deduplication off, sync = standard, encryption = off.  ZFS dataset is shared back to ESXi via NFS.  On that NFS share is a guest VM running Ubuntu 14.04 which is given 1GB memory and 2 cores.  The ZIL device is changed out between tests, I ran each test seven times and took the average discarding the first three test results (I disregarded the first three results to allow some data to get cached into ARC…I did not see any performance improvement after repeating a test three times so I believe that was sufficient).

I’d like to repeat these tests using OmniOS and Solaris sometime but who knows if I’ll ever get to it.  I imagine the results would be pretty close.  Also, of particular interest would be testing on  VMware ESXi 6 beta… I’d be curious to see if there are any changes in how NFS performs there… but if I tested it I wouldn’t be able to post the results because of the NDA.

I ran some benchmarks comparing the Intel DC S3500 vs the Intel DC S3700 when being used as a SLOG/ZIL (ZFS Intent Log).  Both SSDs are what Intel considers datacenter class and they are both very reasonably priced compared to some of the other enterprise class offerings.

Since flushing the cache to spindles is slow, ZFS uses the ZIL to safely commit random writes.  The ZIL is never read from except in the case power is lost before “flushed” writes in memory have been written to the pool.  So to make a decent SLOG/ZIL the SSD must be able to sustain a power loss in the middle of a write without losing or corrupting data.  The ZIL translates random writes to sequential writes so it must be able to sustain fairly high throughput.  I don’t think random write IOPS is as important but I’m sure it helps some. Generally a larger SSD is better because they tend to offer more throughput.  I don’t have an unlimited budget so I got the 80GB S3500 and the 100GB S3700 but if you’re planning for some serious performance you may want to use a larger model, maybe around 200GB or even 400GB.

Don’t try this at home: I should note that FreeNAS is not supported running as a VM guest, and as a general rule running ZFS off of VMDKs is discouraged.  OmniOS would be better supported as a VM guest as long as the HBA is passed to the guest using VMDirectIO.  The Avoton processor doesn’t support VT-d which is why I didn’t try to benchmark in that configuration.

I wiped out the zpool after every configuration change, and ran each test three times for each configuration and took the average (in almost all cases subsequent tests ran faster because the ZFS ARC was caching reads into memory so I was very careful to run the tests in the same order on each configuration.  If I made a mistake I rebooted to clear the ARC).  I am mostly concerned with testing random write performance so these benchmarks are more concerned with write IOPS than with throughput. 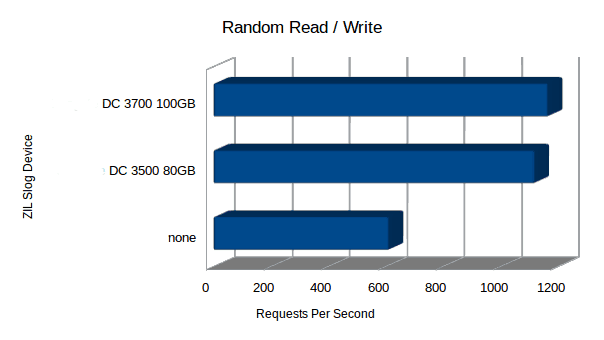 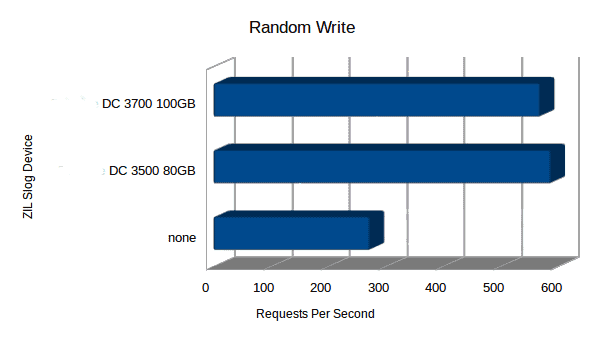 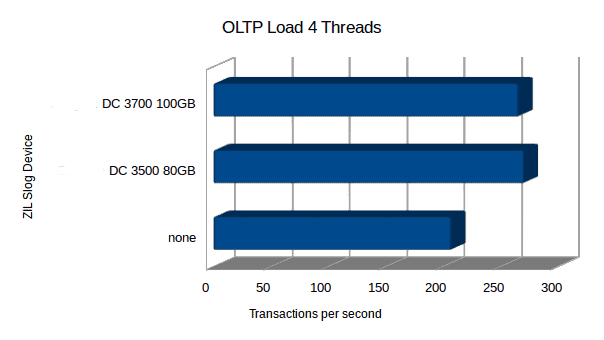 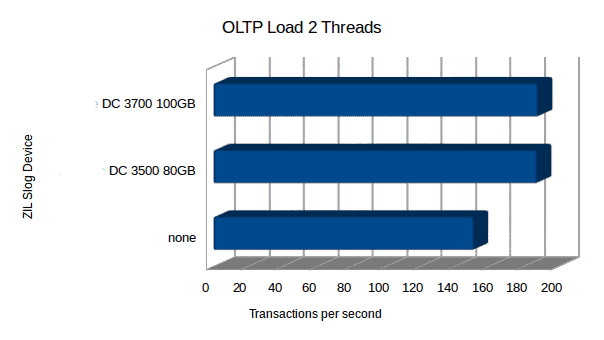 Surprisingly the Intel DC S3700 didn’t offer much of an advantage over the DC S3500.  Real life workload results may vary but the Intel DC S3500 is probably the best performance per dollar for a SLOG device unless you’re concerned about write endurance in which case you’ll want to use the DC S3700.

There are a few SSDs with power loss protection that would also work.  The Seagate 600 Pro SSD, and also for light workloads a consumer SSDs like the Crucial M500 and the Crucial MX100 would be decent candidates and still provide an advantage over running without a SLOG.

I ran a few tests comparing the VMXNET3 vs E1000 network adapter and there is a performance penalty for the E1000.  This test was against the DC 3500. 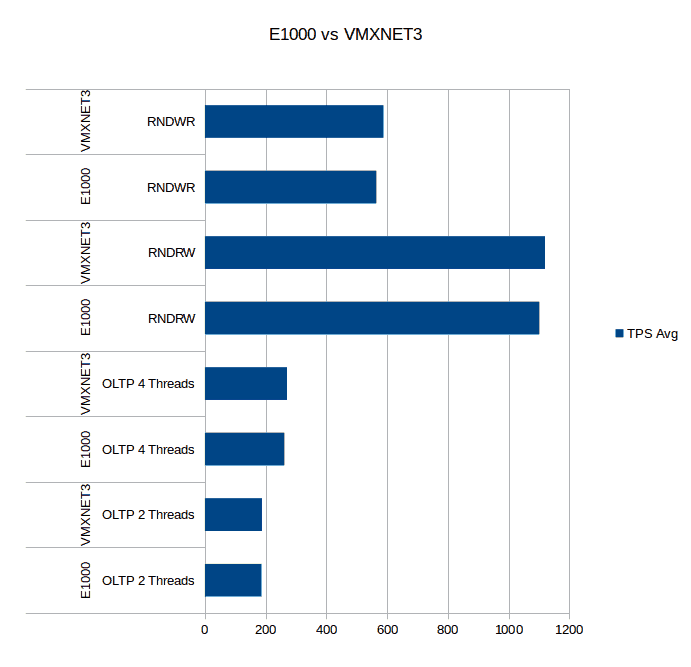 I ran a few tests with Encryption on and off and found a small performance penalty for encryption.  This test was against the DC S3700. 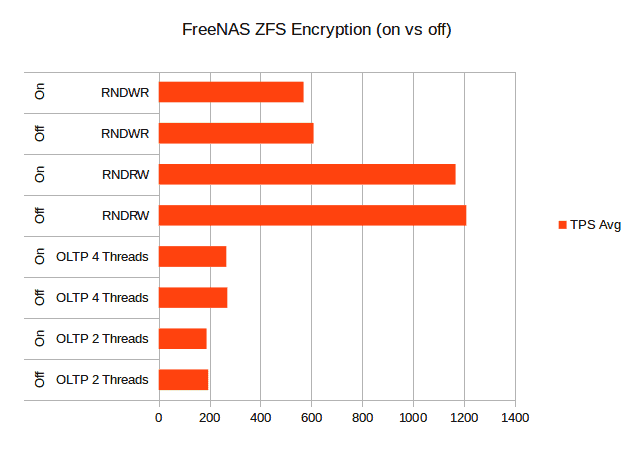