Idaho has been having some issues with immigration lately, my thoughts:

Immigration is a good thing.  It would be un-American to discriminate against any person based on his religion, national origin, ethnic group, operating system preference, etc.. We should be welcoming to all people with good character who are willing to become Americans. That is, as Theodore Roosevelt said: 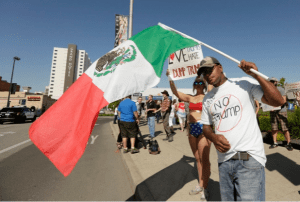 We should not abandon prudence when bringing in immigrants, but judge each person based on their character.  There are those who are flying non-U.S. flags, committing crimes, breaking laws, disrespectful, not seeking employment, not trying to learn English, not willing to take up arms to defend America, these should not have entered U.S. soil in the first place.

I, for one, welcome immigrants from any birthplace who have good character and work diligently and are willing to take an oath to defend this country.  But we, in the United States, are clearly lacking in our ability to judge incoming immigrants and refugees and need to address that first.

Once we’re able to distinguish between those with good intentions and those who have no business entering the U.S., we need a better plan to integrate them into society.  The current plan doesn’t seem to be working out so well.  Locating a bunch of refugees together into ghettos isn’t helpful–I don’t see how this will not result in another class of government dependent people and also resentment from Americans because of their lack of assimilation.  Let them integrate into the rest of America and learn our language and culture, give them jobs.